The right way to button up

Have you ever noticed how some blazer buttons are fastened and some aren’t? The reasons why are simple, you just have to follow the rules on buttoning up. It’s the key to pulling off the classic blazer look.

So what are the rules for jacket buttoning? Simply put, it depends on the type of blazer you’re wearing.

How to wear the one-button jacket

Let’s start with an easy one. If your suit jacket only has one button, like a dinner jacket, for example, then for a super smart look always do it up. It’s fine to undo it when seated to avoid straining the fabric, but to give the best shape when stood up, it should always be buttoned.

How to wear the two-button jacket

If you're going to fasten the jacket then the top button should always be the one that's done up, and the bottom button should be always left undone. This gives the most flattering shape, and many modern suits are actually designed to hang best with the bottom button left open which allows for freedom of movement when walking or sitting at a desk or when driving a car for example.

How to wear the three-button jacket 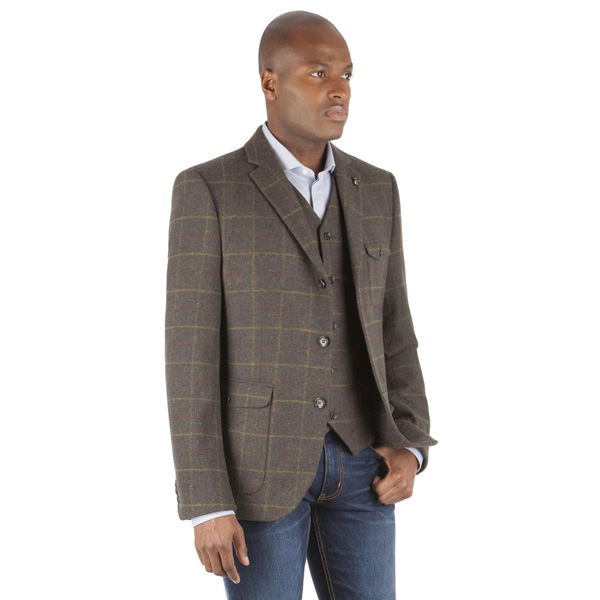 When wearing the jacket fastened, the middle button should always be the one that's done up, the bottom button is conventionaly always left open, and the top button is really up to you. Three buttons is often the maximum you would have on a single-breasted jacket although some country style jackets have a button on the reverse side of the lapel so that the jacket can be positioned higher in colder weather. Some Gibson London Jackets also feature a button fastened storm collar tab at the neck for added protection from the elements.

How to wear the double breasted suit

The double-breasted jacket is a slightly different beast, with less well-defined rules, however it is rarely worn unbuttoned. You could apply the same principle of leaving the bottom button undone like Avengers actor Tom Hiddleston or go with your personal preference and what suits your shape.

How to wear a waistcoat

Likewise with waistcoats, you can generally go with your own preference with what you button and what you don’t, however recent convention dictates that the bottom button is often left undone for freedom of movement.

So what’s the reason for this rule about leaving bottom buttons undone? The generally accepted theory among sartorial historians is that it was due to the expansive waistline of Edward VII. He couldn’t fasten his bottom button over his generous stomach so he simply left it open, and courtiers wanting to avoid causing offence followed suit.

With Britain’s influence spread far and wide via its empire, the fashion didn’t take long to catch on among gentleman of the time, and has stayed with us ever since.